This is VOA news reporting. Via remote I’m Michael Brown. US lawmakers at this hour are debating the objection to the state of Pennsylvania's electoral vote. Hours after hundreds of pro-Trump protesters stormed the Capitol Building, forcing lawmakers to seek shelter, interrupting the certification of Joe Biden's Electoral College victory. Since the proceedings resumed the House of Representatives voted overwhelmingly to reject an objection to President-elect Biden's win in Arizona joining the Senate in upholding the results of the election there. President Trump stirred up the protesters at a rally early Wednesday near the White House and later released a video on Twitter saying he loved them, urging them to go home. But not before his followers rushed the Capitol, some vandalizing the building. One woman was shot and killed, the circumstances of the shooting are being investigated. 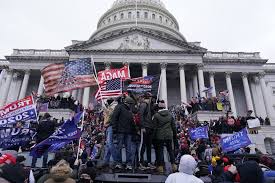 Washington's Mayor declared a curfew until 6am this morning, and police in riot gear arrived to move the demonstrators away. President-elect Joe Biden condemned the protesters storming the Capitol Building, calling the action an assault on the most sacred of America's undertakings, “the doing of people's business.” Biden and vice president Kamala Harris will be sworn into office on January 20th. World leaders expressed shock and condemned the chaos on the Capitol grounds and at the Capitol as pro-Trump members rioted the Capitol Building. British Prime Minister Boris Johnson described the scenes at the US Congress as disgraceful. The Japanese government said Thursday had hoped the US would overcome the turmoil caused by the anger of supporters of President Trump. For more news, join us at VOAnews.com. Via remote, this is VOA news.