A top British police official says officers have issued about 45,000 fines for COVID-19 restriction violations and they will continue to issue more to keep the infection from spreading. The chair of Britain's National Police Chiefs' Council, Martin Hewitt, made the comments at a news conference along with Home Secretary Priti Patel. Hewitt said he makes no apology for the fines levied because too many people were still choosing not to abide by the rules. He warned there would be more officers out on patrol to catch those who he said were "endangering us all." Britain is among the countries hardest hit by the pandemic and is in the midst of a third national lockdown to stop rapidly spreading infections. The nation reported another 1,200 deaths on Tuesday. 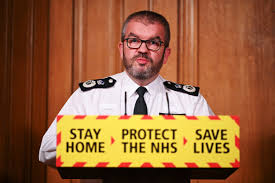 A third Democratic member of the House of Representatives has tested positive for COVID-19. This comes after lawmakers were forced into lockdown during the Capitol riot. Many Republican lawmakers were also in the room and refused to wear masks, according to fellow politicians' statements and video from the room. （Brian） Brad Schneider released a statement announcing his diagnosis and said, quote, "I was forced to spend several hours in a secure but confined location with dozens of other members of Congress. Several Republican lawmakers in the room adamantly refused to wear a mask … even when politely asked by their colleagues."

Russian opposition leader Alexey Navalny says Moscow authorities have formally asked a Russian court to jail him. They say he violated terms of his parole dating back to a 2015 suspended sentence. It's the latest twist in a lengthy political fight between Navalny and the Kremlin. Navalny made the announcement from Germany. That's where he has spent the past four months recovering from an August poison attack carried out while traveling in Siberia. Navalny argues the attack was carried out by Russia's Federal Security Services on orders from President Vladimir Putin. Court documents published online confirmed the move. Tuesday's news didn't come entirely by surprise. Last month, Russia's prison service ordered Navalny to attend a parole hearing or risk jail for failing to return before the terms of his suspended sentence expired. Via remote, I'm Liz Parker, VOA news.